Testnet for ‘Hooks’ amendment on XRPL to be released in Q1

During the last days, the crypto market took a break in its upward trend to move into a consolidation phase. During this weekend, however, the upward momentum seems to have returned. And again, Stellar Lumens‘ native cryptocurrency, XLM, is one of the best performers within in top 20 by market cap.

After recovering from a drop a week ago, XLM is at its annual high of $0.19 with a sideways movement in the last 24 hours. On the weekly and monthly chart, XLM is recording significant gains atwith 83.43% and 157% respectively. One of the reasons for the rally was certainly the price development of Bitcoin.

By achieving a high level of institutional adoption, BTC seems to have led to a new boom in the interest generated by cryptocurrencies to new investors. At the time of publication, Bitcoin has again managed to break the important $18,000 mark. Traders like Josh Rager have predicted a continuation of the upward trend for BTC if it manages to stay above that level.

Otherwise, the cryptocurrency could crash to levels it saw in the middle of the year. The price of XLM could follow it in any direction. In that sense, analysis firm Cryptowatch stated: 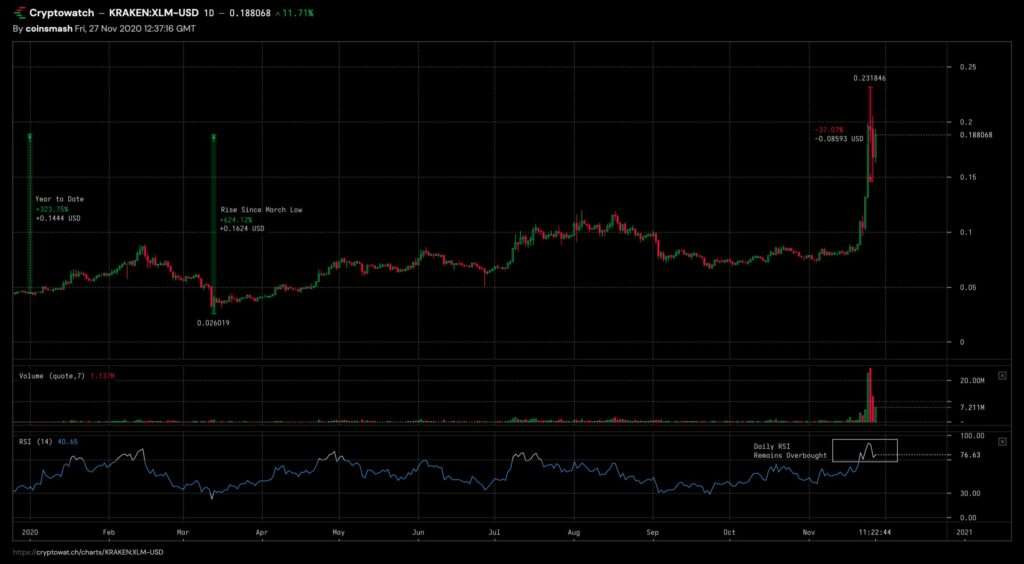 The price of XLM rises with its adoption

As reported by CNF, Stellar Lumens recently has had a number of important announcements that have undoubtedly influenced the price of XLM. For example, Settle Network has launched two stablecoins based on the currencies of Argentina and Brazil. The stablecoins are supported by Stellar’s blockchain.

In addition, the Stellar Development Foundation (SDF) announced an update for the blockchain protocol that will bring new features to Stellar Lumens. Protocol 15, as they have called the update, will allow for the integration of applications and services that are “more attractive to a wider audience,” as the SDF stated.

Furthermore, analysis by the firm Santiment shows that XRP, ADA, and XLM have seen a significant increase in their “social volume”. That is, the amount of searches and mentions they have had in social networks has increased with their price. Although this metric has been decreasing, they are still among the main trends in the crypto industry. Santiment says:

$XRP is somewhat cooling off after its fantastic +160% rally, but that hasn’t slowed it down from continuing to be the #1 #crypto topic, according to @santimentfeed metrics. $XLM, $XVG, and $ADA are also getting a significant uptick in discourse.

Testnet for ‘Hooks’ amendment on XRPL to be released in Q1

Insurance firm MassMutual buys $100 million worth of bitcoin through NYDIG

BTC/USD Needs to Reclaim $40,000; Bullish Momentum May Fade Away